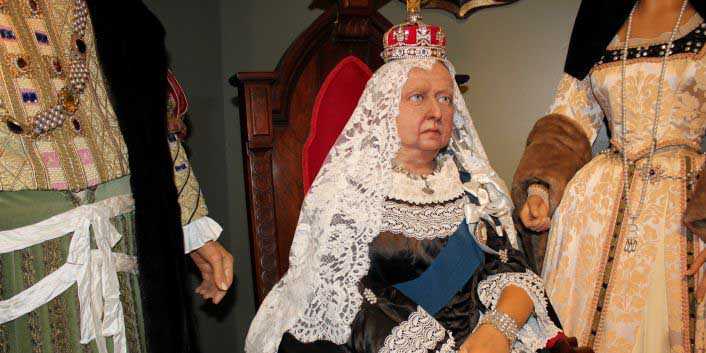 Posted in Rainy Day Activities, Wax World of the Stars by Jill Hamilton

Wax World of the Stars, located in Cavendish at Mariner’s Cove Boardwalk, is home to lots of famous faces. Among the celebrities and movie characters, you’ll also encounter several wax figures from history. As a history nerd, I really enjoyed the Wax World displays.

Here are the top 5 displays at Wax World for a history enthusiast.

I couldn’t write about the historical Wax World displays and not mention these two, so I might as well start with them. 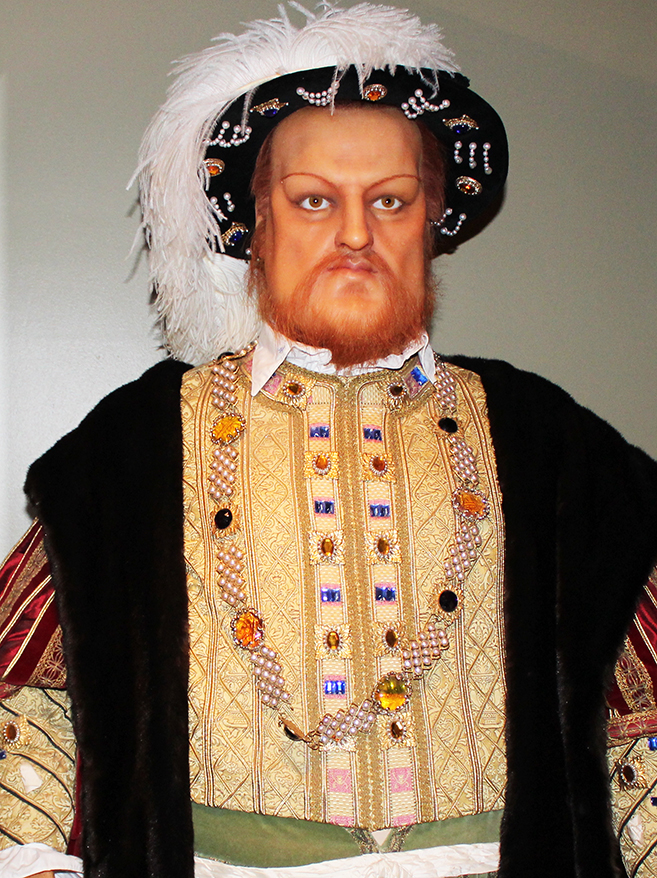 Henry VIII, the ruler of England for 37 years is famous for three things: marrying six times, being massively fat, and separating England from the Catholic Church so he could marry his second wife, Anne Boleyn. He was an expert athlete, a musician, and quite handsome in his youth but after a nasty fall during a joust in 1536, his personality changed drastically and his temper turned deadly. 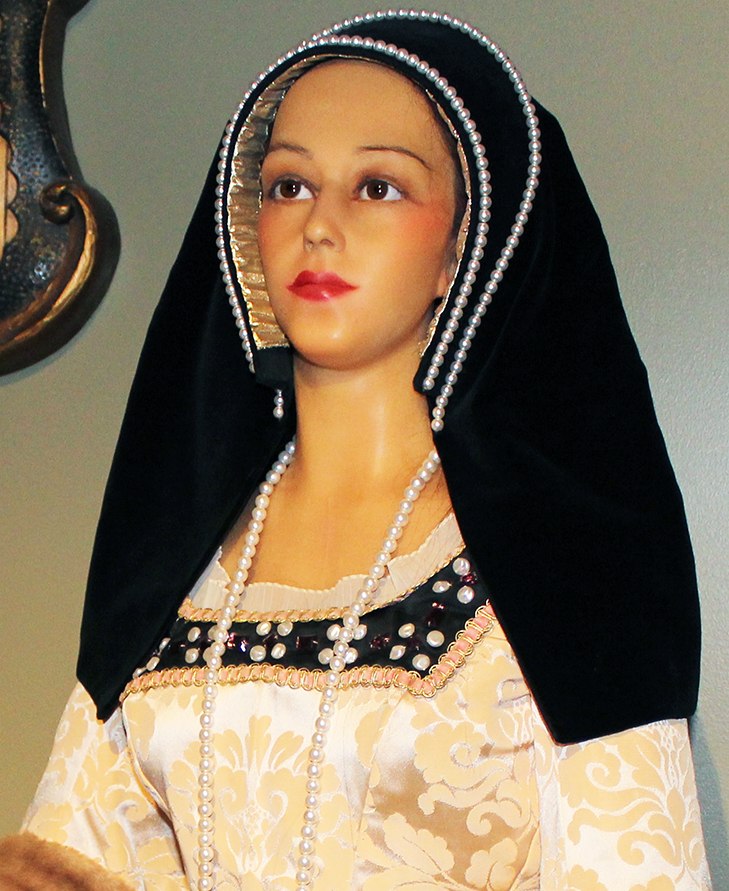 When Henry’s love for his first wife began to wane, one of her ladies-in-waiting caught the king’s eye.

Anne Boleyn, located near Henry at Wax World, was sassy and sophisticated. Anne had no desire to be Henry’s mistress (like her sister had been). She encouraged Henry to find a way to divorce his wife. At the time, the only way to do this was to get permission from the pope. After several years of debating, Henry made himself Head of the Church of England and took Anne as his wife. The Anglican Church was born.

However, the marriage was short-lived. Henry fell in love with another lady-in-waiting—Henry had a type—and Anne’s flirtatious behavior was used against her. She was sent to the Tower of London and beheaded in May 1536.

The Anne Boleyn figure at Wax World includes her infamous sixth finger, an extra digit fused to her pinky. She is said to have covered this extra appendage using long sleeves or jewels.

However, Henry VIII was extremely wary of illness or physical deformity. If Anne—or any of Henry’s wives, for that matter—showed any sign of physical defect, he would have run for the hills, giant turkey leg in hand!

The myth of Anne’s extra finger came from one of the many lies her enemies made up to turn everyone against her. These same folks also called Boleyn a sorceress and accused her of having romantic entanglements with hundreds of men. None of these tall tales are true.

Although not a celebrity or historical figure, Wax World is home to a 125,000-piece Lego replica of the RMS Titanic , complete with several detailed decks. Built by an Islander, the 10-foot model took three years to build and shows several guest cabins, a dining room, turbines, and more. I was stunned at how detailed the model is.

Launched from Southampton, UK on April 10, 1912, the luxury ocean liner was considered the most extravagant way to travel during the Edwardian era—for the 324 First Class passengers
anyway. The standards for the 709 passengers in steerage were much lower, but still actually fairly nice for sea travel at the time. 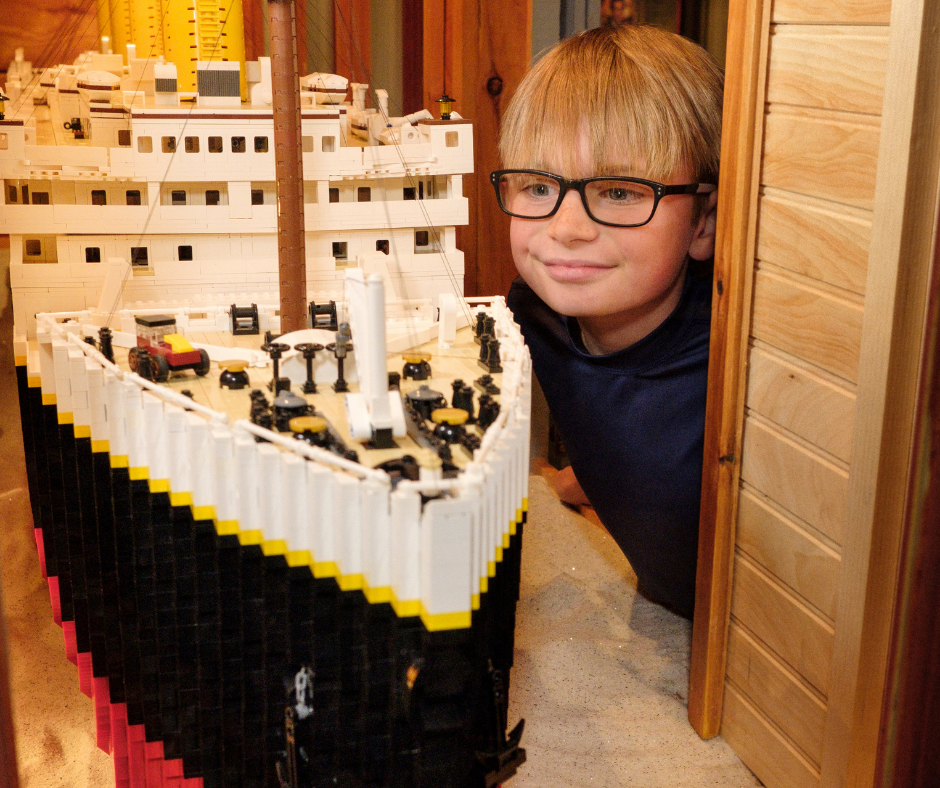 Shortly before midnight on April 14, very close to the front of the ship, there was an iceberg. Because of the ship’s massive size (again, for the time), turning to avoid it took a long time and the ship scraped up against the iceberg, leaving a gash that quickly filled with the icy waters of the Atlantic Ocean. Within three hours of the collision, the ship once dubbed “unsinkable” was at the bottom of the ocean, leaving about 1500 fatalities in her wake.

The figure of Queen Victoria is an especially good likeness. Her figure at Wax World captures the solemn expression she wore in many royal portraits during her long reign. 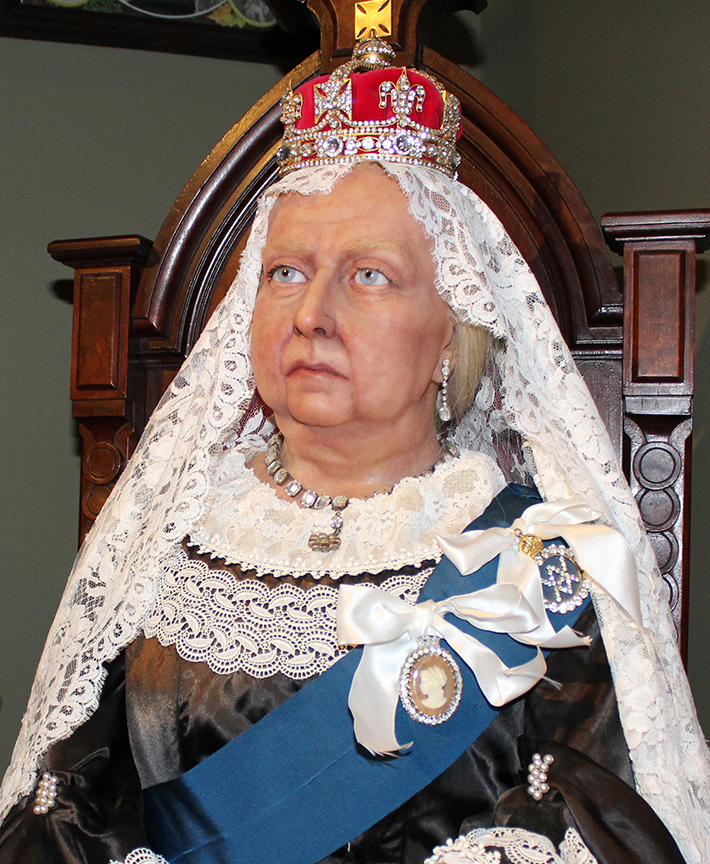 (To be fair, smiling in photographs in the mid-1800s was impractical—in the early days of cameras, taking a single photo took about 15 minutes. You try sitting and smiling for 15 minutes straight!)

Queen Victoria reigned for over 63 years (1837-1901) during a time when England was at its height of power. Under Victoria’s reign, many countries came under British rule: Ireland, Canada, large parts of India, Australia, New Zealand, and several areas of Africa, South America and Asia. Queen Victoria was the monarch of quarter of the world’s population by 1901.

Victoria married her cousin, Albert, and had a huge brood of children, many of whom were married off to the most powerful families of Europe. The Victorian era was one of expansion, significant scientific developments, great literature, and dramatic social change. Many countries, Canada included, commemorate Victoria’s birthday with a holiday.

The daughter of the Empress of Austria, Maria Antonia was always bound for life as the wife of a fellow royal. She was charming and a graceful dancer when she first arrived at Versailles, outside of Paris, in 1770. With her Frenchified name, Marie Antoinette married the future King of France, Louis-Auguste, and took advantage of the super luxe life that Versailles residents tended to live: lots of parties, expensive gowns, tall hairstyles, and many nights of gambling. These hobbies only intensified when King Louis XV died and she became Queen of France in 1774. 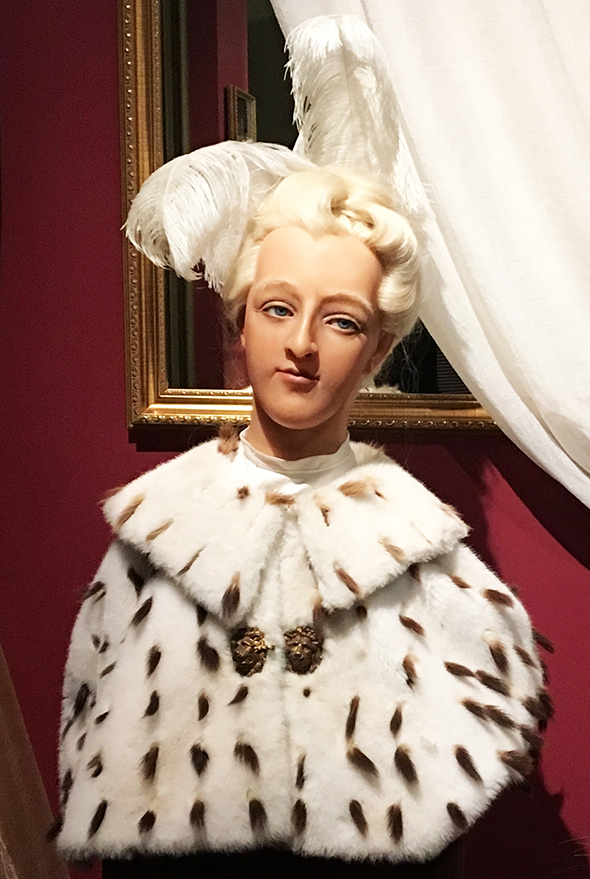 France’s purse was drained for several reasons: the building of Versailles was a major expense, France gave the young and rebellious United States of America a bunch of money to fight the British during the Revolutionary War, and, of course, the royal family spent extravagantly. The French economy suffered and the people of Paris starved. They eventually aimed their anger and frustration at the royal family, Marie Antoinette specifically. This was because she was seen as an Austrian outsider and, thus, an easy target.

A mob of furious, hungry women stormed the palace and the royal family was forced out of Versailles and into a palace in Paris. They were imprisoned for several years while the French Revolution blossomed outside. Louis-Auguste, the former King of France, was beheaded by guillotine in January 1793 and Marie Antoinette would share the same fate in October.

Marie Antoinette has a history when it comes to her look being replicated in wax. A regular visitor to court was a Parisian artist who made her living from creating wax likenesses of famous people. She would then set them up in her shop so commoners could view them. This was one of the only ways people living in 18th century France would know what these people looked like. The artist was Madame Tussaud.

Marie Antoinette did not say “Let them eat cake” in response to the lack of bread to eat. She was aware of the economic state of France and was slightly more sensitive than history gives her credit for.

The Cleopatra is one of the Wax World displays in Cavendish. She is based on the 1963 film starring Elizabeth Taylor. Many historians have taken guesses at what the real Cleopatra looked like using contemporary descriptions and archaeological evidence. Despite this, the classic movie depicted her in a unmatched way. 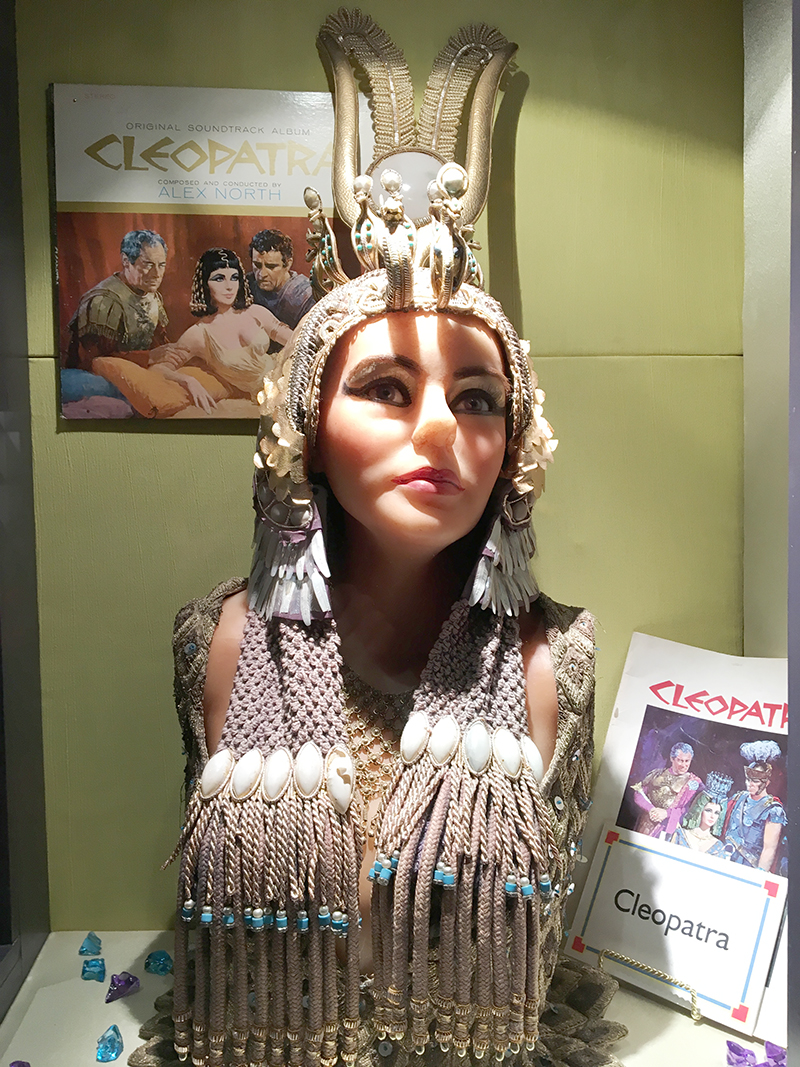 Born in Alexandria in 69 BCE of Macedonian Greek heritage, Cleopatra ruled Egypt for about 30 years. To keep the power within the family, she married both of her younger brothers (ew) but co-ruled with them only in name. Cleopatra was too ambitious for that, having already co-ruled for a time with their father. By the time she married her second brother, Cleopatra was already romantically involved with the Roman general and politician, Julius Caesar.

After Caesar’s assassination in 44 BCE, Cleopatra (probably) had her brother poisoned,  so she could co-rule with her son.

Octavian (Caesar’s adopted son and heir) invaded Egypt in 31 BCE. In order to avoid capture and imprisonment, Cleopatra committed suicide. She famously poisoned herself, possibly with a snake or a needle, it is unclear. Her son, Caesarion, would rule as the last pharaoh of Egypt for just 18 days before he was executed by Octavian.

It’s hard to comprehend just how old Egypt actually is. Most people think of Cleopatra, the second-last pharaoh, as living a long, long time ago. In reality, there is less time between us and Cleopatra’s life than Cleopatra and another well-known Egyptian ruler, Nefertiti.

Wax World displays feature several other historical figures. Some of them include: Louis Riel, Scarlett and Rhett from Gone With the Wind , a few Canadian politicians, and more.

A Family’s Guide to Visiting Cavendish

The Life of Robert L. Ripley, Curator of the Weird and Wonderful

How to Organize a Mini Golf Tournament